He shoots, he scores! Yes my friends, fall has arrived and hockey season is here. The sports networks are fired up with anticipation of following the Canucks on their road to the Stanley Cup; however, TSN has seemingly forgotten about you. Commercial leagues, drop-in ice time, friends with scheduled pick up games; the opportunities are out there, but are you ready? 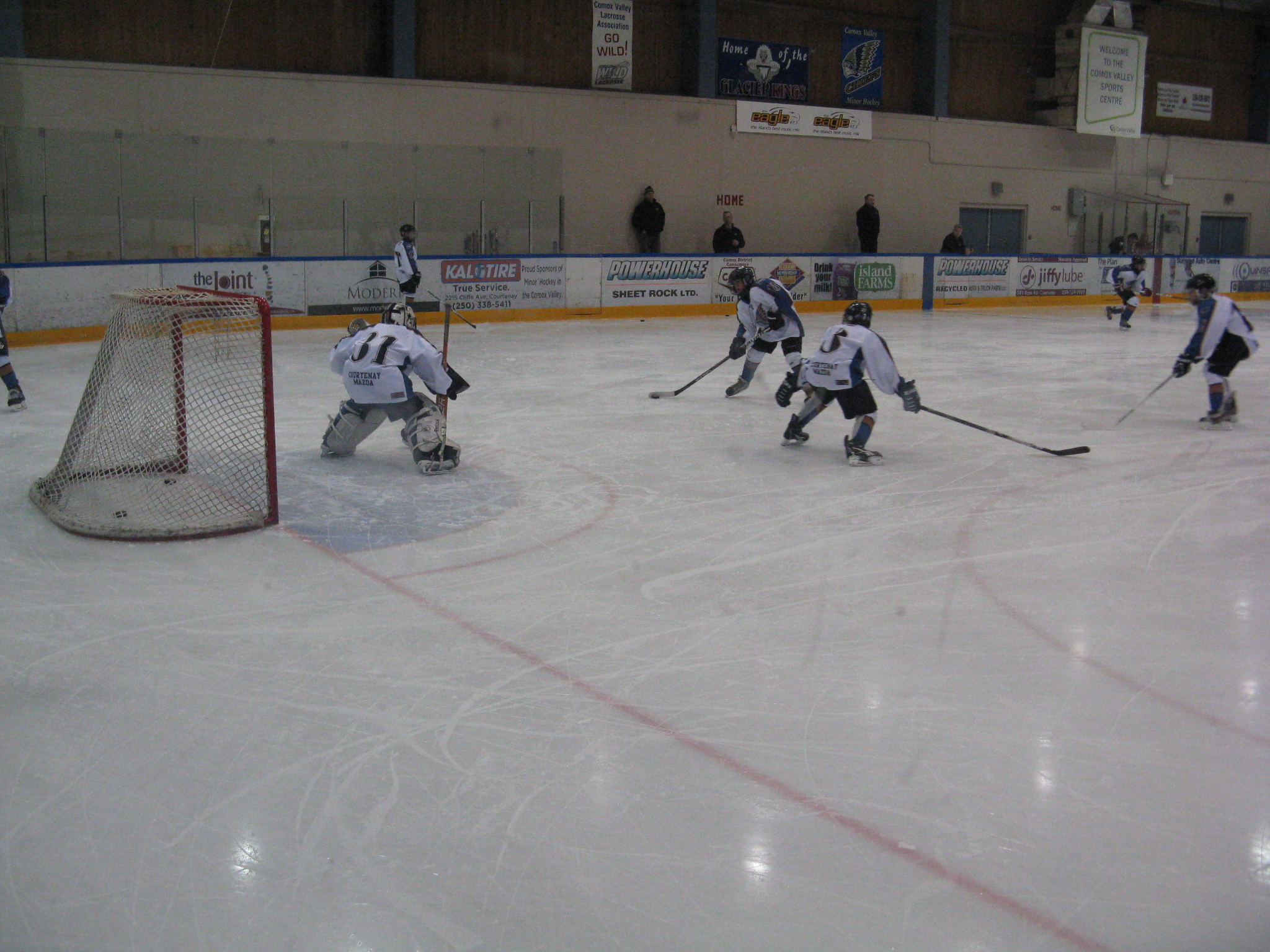 PROTECTIVE EQUIPMENT:
Protective equipment plays a crucial role in the prevention of injuries. Equipment should be regularly evaluated with regard to proper fitting, protective quality, and maintenance.

Helmet: a properly fitted CSA certified helmet that covers the entire skull (forehead, temple, ears and base of the skull). Do not apply paint, stickers, or decals as they weaken the structure. Cracks render the helmet unsafe and require replacement.

Face Mask: a CSA certified plastic visor or cage. Find a mask that is specific to your needs and is compatible with your helmet. Face masks must be regularly inspected: screws must be tight, cracked visors must be replaced, and wire cages cannot be altered in anyway. 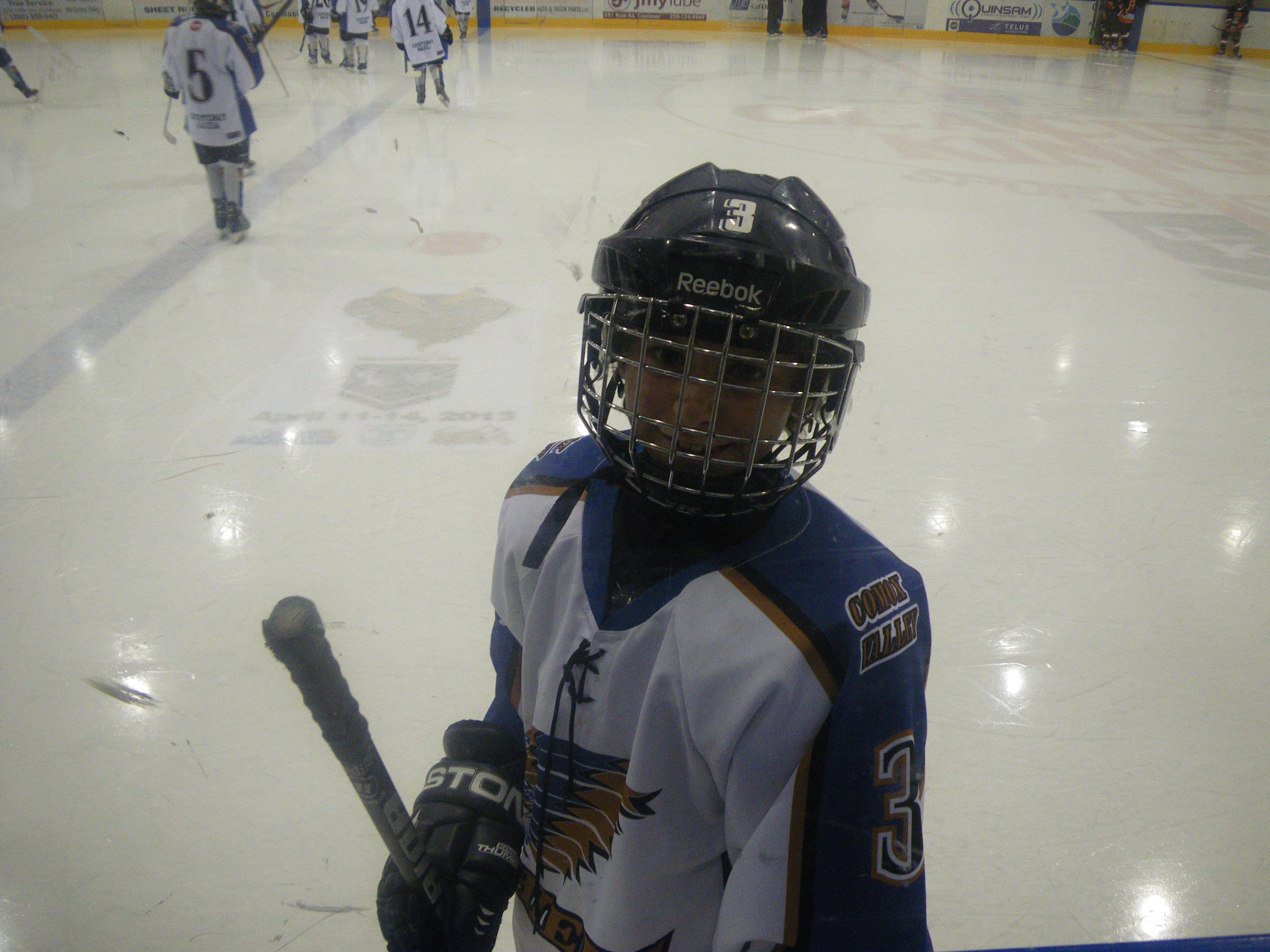 Throat protector: a guard to protect the neck and upper chest.

Mouthguard: to prevent dental injuries and concussions. Ideally,these should be molded to the athlete’s teeth by a dentist.

Shoulder Pads: to protect the shoulder joint, collar bone, chest, back and upper arms. The addition of a chest protector aids in breast protection for females.

Elbow pads (with a Slash guard): to protect the elbow and a portion of the forearm and upper arm. Pads should be snug but not uncomfortable.

Gloves: should be snug but not too tight (to maintain full sensation in the palm and fingertips). Longer cuffs help to protect the wrist and forearm.

Jock/Jill Strap - Athletic Support: are fitted according to waist size.

Shin Pads: to protect the shin and knee regions.

Skates: to provide support to the ankle and protection for the foot and achilles tendon. The “general rule” is, you buy skates one sizesmaller than your shoes. When fitting skates keep trying sizes untilyour toes press up against the protective toe cap, then move up onehalf to one full size. When laced up, the eyelets should be spaced one to two inches apart. If the distance is less, the skates are too wide for your foot. If the distance is more, they are too narrow.

PHYSICAL CONDITIONING:
When it comes to hockey, “is bigger better?” Todd Bertuzzi, an ex-Canuck, made a name for himself but it was not by size alone. He worked extremely hard on and off the ice to achieve peak strength, fitness and agility, so he could dominate on both ends of the rink.

Hockey is a sport that requires many dimensions of fitness. There are seven fitness components that will help to maximize your game:

Flexibility: ability of the joints of the body to move freely and fullythrough their entire range of motion. Maximum flexibility isacquired through regular routine stretching and mobilization of thespine.

Power, Strength & Endurance: these three components are key to muscular conditioning. They provide a player with the power forquick bursts of energy (slap-shots or power skating), the strength tobattle with opponents along the boards, and the endurance to last anentire game.

Coordination: skating agility and stick handling are two skills that improve with practice. Execution of drills help to develop a player’s abilities and prepare them for game situations. “Practice, practice, practice!”

Aerobic conditioning: a method of training which utilizes oxygen as an energy source, where the athlete functions at 65-85% of maximum effort for a sustained period of time. This type of traininghelps to build stamina, which is essential to play hard for an entiregame.

Anaerobic conditioning: is a method of training, which does not utilize oxygen as an energy source, where the athlete functions at maximum intensity (greater than 85% maximum effort) for a short period of time. This type of training helps for those quick line changes where maximal effort is required for 1 to 2 minutes followed by a 4 to 5 minute break.

The majority of interviews taken after the game occur while players are on exercise equipment. This shows hockey doesn’t stop when you step off of the ice. To help prevent injuries, the Canadian Hockey Association recommends players arrive at the rink 30 minutes before the game to stretch and warm-up and stay another 30 minutes afterwards to cool down and stretch.

* All stretches should be performed twice and held for 30 seconds to 1 minute. Prior to stretching, it is advisable to add a 5 to 10 minute pre-game warm-up and post game cool down. Walking on a treadmill or pedaling on an exercise bike is ideal.

Although hockey is a seasonal sport, training for it doesn’t have to be. The summer is a great opportunity to get outdoors and use those in-line skates. As with most physical sports, injuries are common. The majority of hockey injuries can be prevented by focusing on core strength, spinal alignment and spinal flexibility. A chiropractic tune up with your Comox Chiropractor, Dr. Houlgrave, can help you to maintain peak conditioning and prevent injury.

Whether you reach the Stanley Cup finals or lose in the first round of your local league, you can continue working on your fitness and skills in the off-season. There are many opportunities around the Comox Valley to get involved in: floor or in-line hockey leagues, hockey camps, power skating camps, etc… Maybe next year, TSN will be reporting about you!